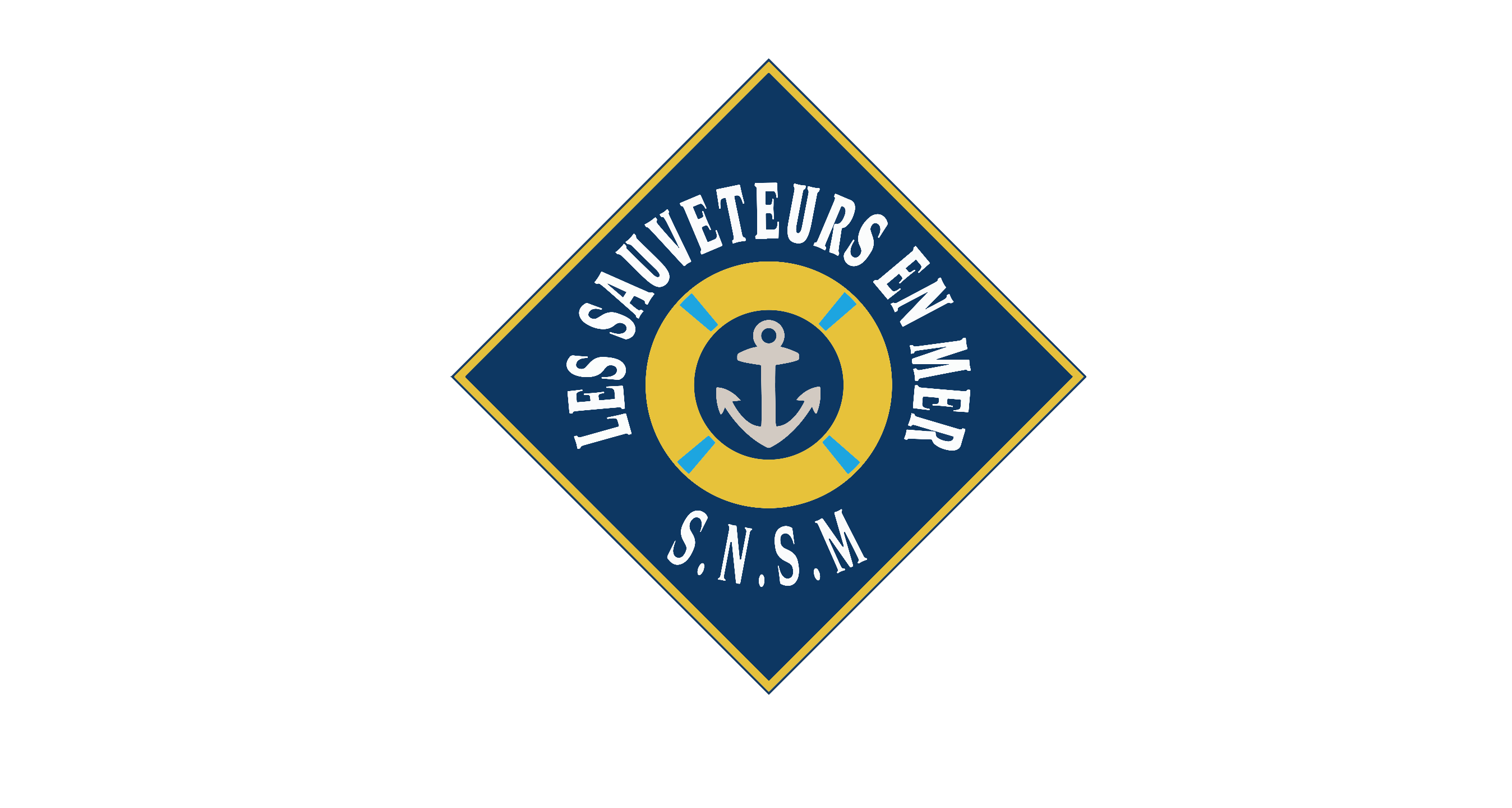 THE SEA RESCUERS
After one year of development and following the recommendations of the Sea Rescuers, MER-AIR-TERRE is delighted to present a new edition of its Compressor watch which strengthens its partnership signed in 2019 with the SNSM. Respecting the strict technical specifications of the Sea Rescuers, the «SNSM Compressor Black Edition» signs a return to its roots for MER-AIR-TERRE which has become well known -15 years ago- with watch creations exclusively designed in black PVD. In that respect, the «SNSM Black Edition» is a true collector.
THE COMPRESSOR WATCH

The Compressor case is equipped with 2 screwdown crowns integrated in the body to ensure it is water-proof and to provide maximum durability. The 4H winding mechanism means the watch can be regulated while the 2H crown activates the internal rotating bezel. This watch comes in a black PVD satin-brushed execution and a black sunburst dial distinguished by fine touches of orange for optimum readability. Waterproof to 200 metres, with a Swiss automatic movement, a domed sapphire glass and reinforced spring bars, this useful watch is both technically sophisticated and elegant. With a diameter of 42.5mm, this aquatic watch is equipped with a rubber strap with a deployant buckle, as well as a black canvas strap. The two are easy to swap using the tool provided. Its highly-resistant case is made of recycled black leather, an orange zipper and bears the emblem of the SNSM, and you can take it with you wherever you go. This is part of a Limited Edition of 300 and is available for €1850. For each watch sold, MATWATCHES has agreed to donate a 10% to the Sea Rescuers association.

A PURCHASE IN SOLIDARITY 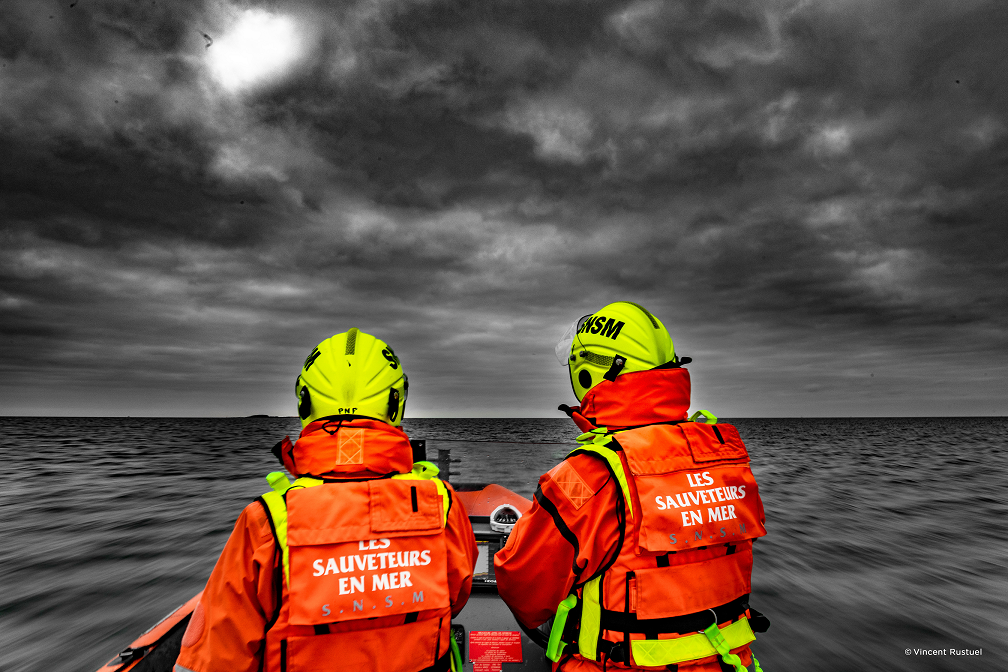 In 2019, after one year of development and following the recommendations of the specifications of the Sea rescuers, MER-AIR-TERRE was presenting their partnership, which becomes reality through the creation of a Compressor watch. The Compressor case is equipped with 2 screw-down crowns integrated in the body to ensure it is water-proof and to provide maximum durability. The 4H winding mechanism means the watch can be regulated while the 2H crown activates the internal rotating bezel.Waterproof to 200 metres, with ETA 2824-2 automatic Swiss movement, a domed sapphire glass and reinforced spring bars, this useful watch is both technically sophisticated and elegant.This watch in the SNSM colours comes in 2 dial versions (limited edition of 300 pieces), distinguished by fine touches of orange for optimum readability.

A PURCHASE IN SOLIDARITY 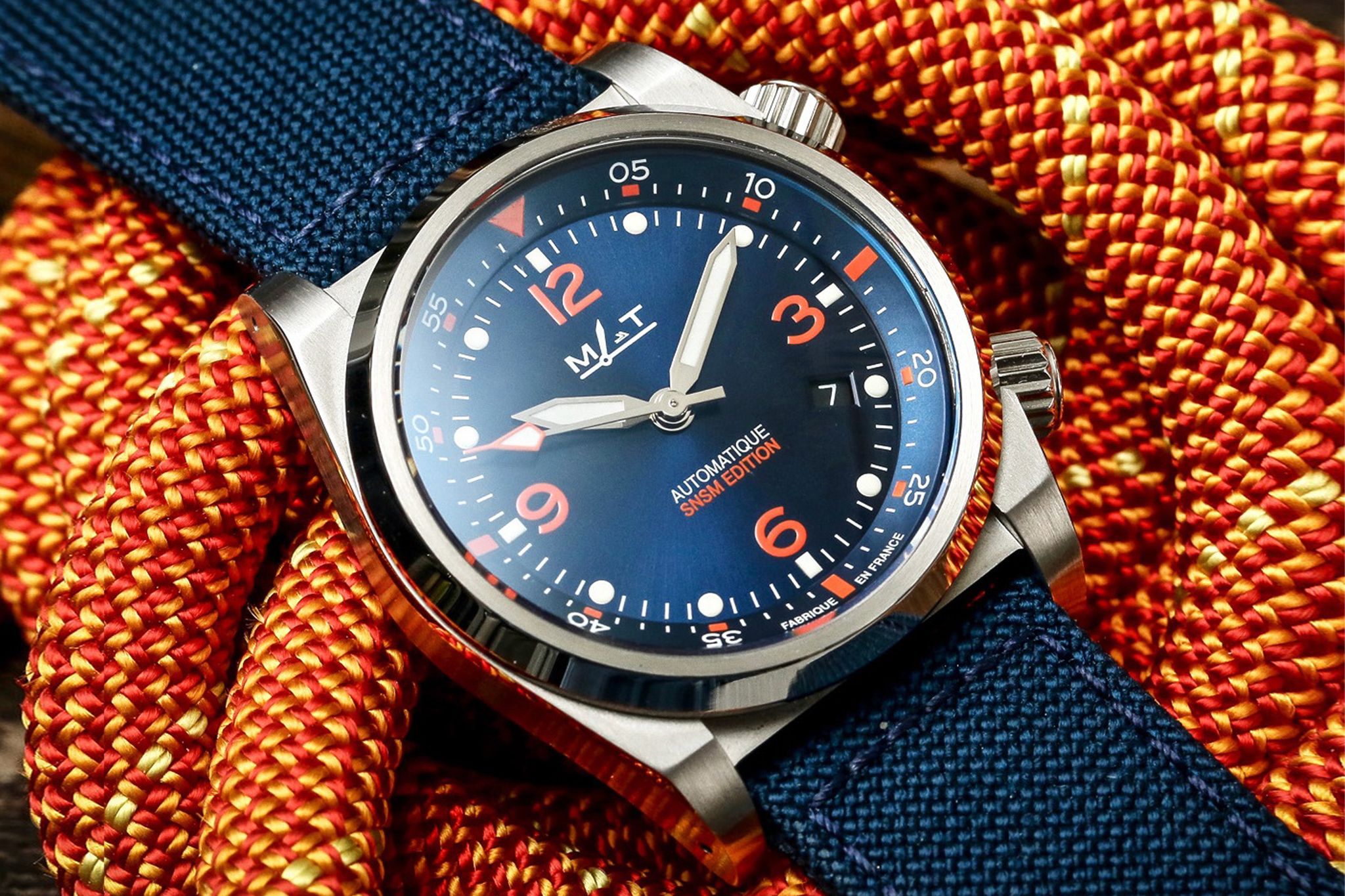 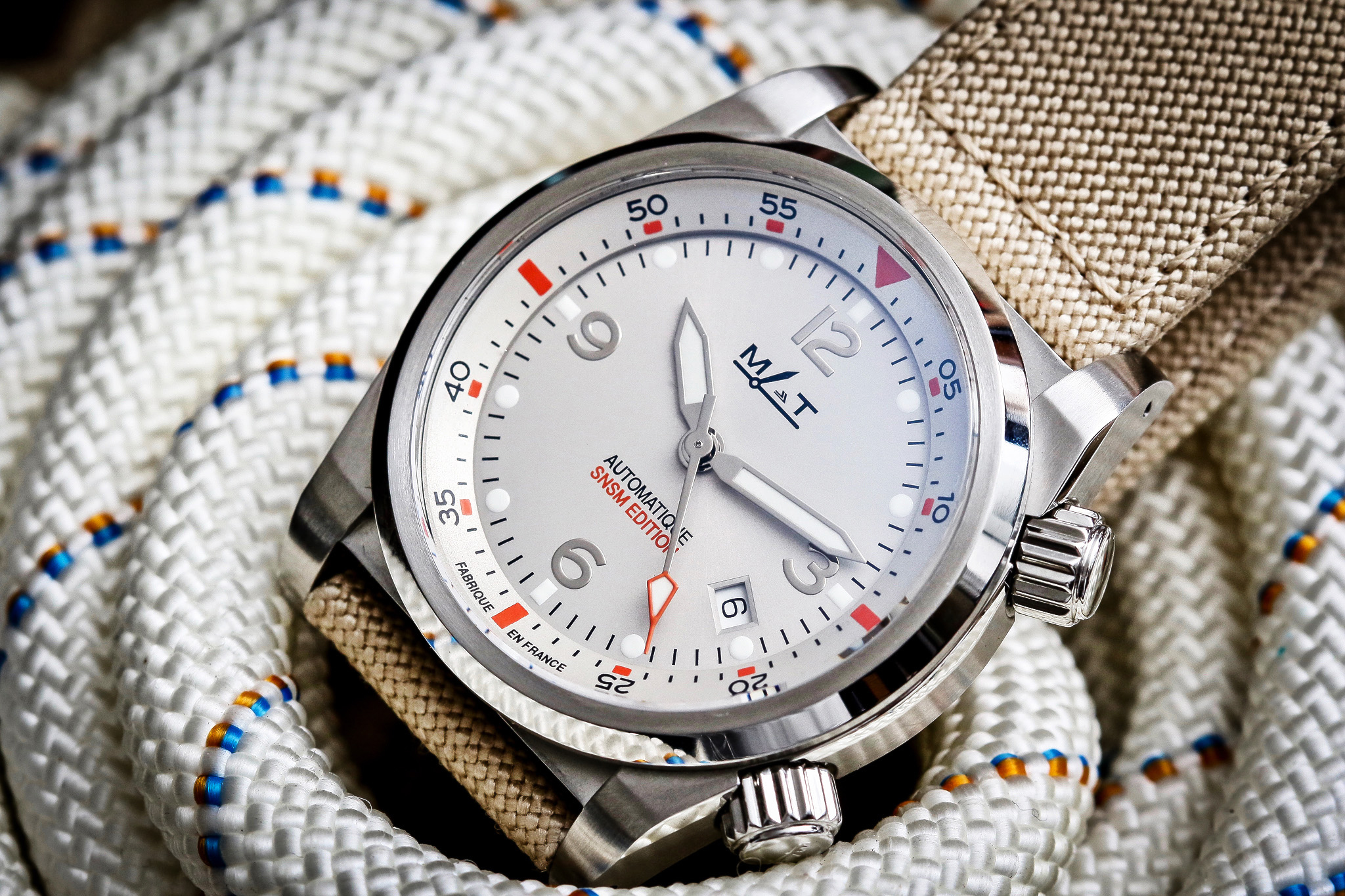 SAVING LIVES AT SEA AND ON SHORE

RAISING AWARENESS OF AND PREVENTING RISKS 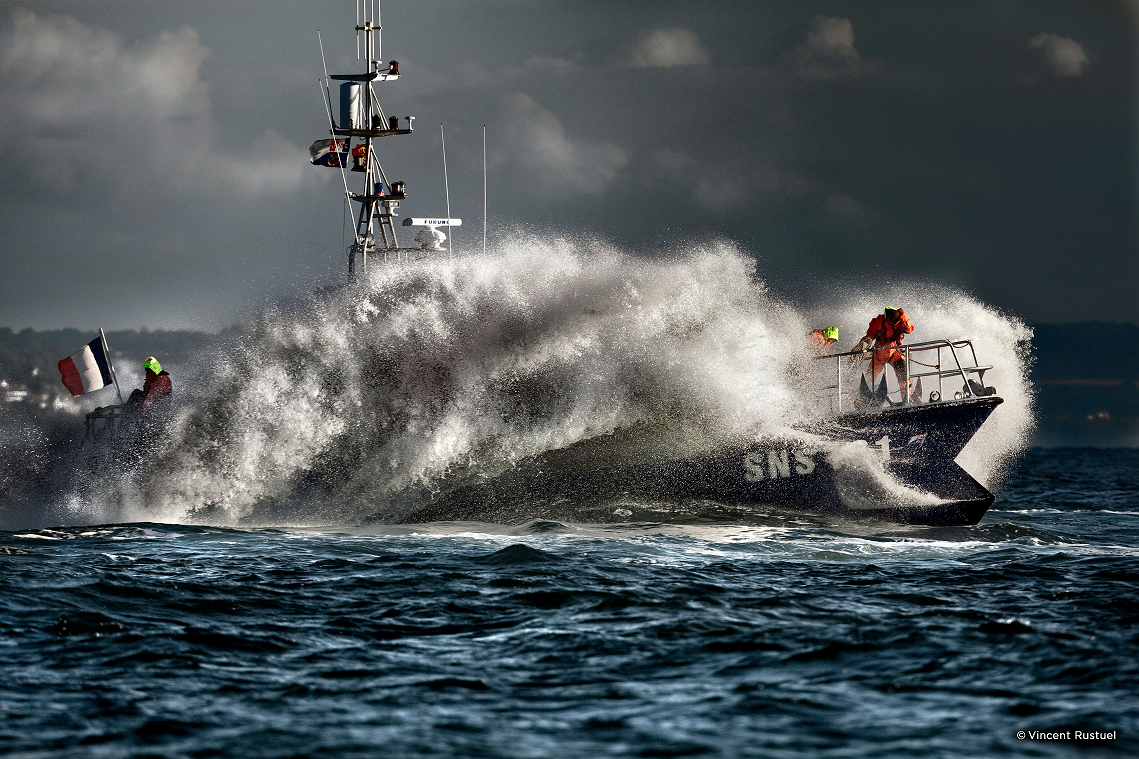 SEA RESCUERS - OVER 150 YEARS OF HISTORY

The SNSM (the Société Nationale de Sauvetage en Mer - the National Company of Sea Rescuers) is a non-profit association under the French law of 1901, created in 1967 through the merger of the Société Centrale de Sauvetage des Naufragés (SCSN - the Central Company for Sea Rescue), founded by Admiral Rigault de Genouilly in 1865, and the Société des Hospitaliers Sauveteurs Bretons (HSB - the Society of Sea Rescuers of Brittany), created by Henri Nadault de Buffon in 1873, two century-old associations born of an age-old maritime tradition: that of volunteers rescuing people at sea, free of charge. The SNSM was recognized to be of public utility by the decree of April 30th, 1970.

In 2017, for its fiftieth anniversary, the government decreed sea rescue to be a "Great national cause" and instituted the first National Sea Rescuer Day. The objective of the SNSM is to rescue anyone in danger at sea and on the coast, in Metropolitan France and the Overseas Territories (Reunion, the Antilles, New-Caledonia, Mayotte, Saint-Pierre and Miquelon and French Guiana). It is the only institution to have both the skills and qualifications needed to intervene on the beaches and offshore.

The national sea rescuers association is 80% financed by private donations, and its main purpose is rescuing people at sea. It draws upon the services of 8,000 volunteers for sea rescue operations and operates from 214 rescue stations throughout France (Metropolitan and overseas) and from 32 training and intervention centres.

Rescue stations in France and overseas